This article includes a series of expert podcasts collected by Erica Marat and Myles Smith. To listen to the podcasts in full, click on the hyperlinked names of participants quoted in the article below.

With this year’s withdrawal of U.S. and NATO troops from Afghanistan, the future of regional security in Central Asia remains uncertain. To fill the void of a departing military presence, the Obama administration developed the New Silk Road initiative as its exit strategy. The initiative is designed to maintain regional security by linking Central and South Asian countries through trade.

Afghanistan and its neighboring Central Asian countries generally support establishing trade links across borders. However, the countries have differing views on what they think the impact a Western-created policy will have on the region.

Those who support the strategy consider it a reasonable way to forge economic links among major regional actors. They presume that a bolstered regional economy will foster security after the departure of Western troops from Afghanistan.

Several projects have already found monetary and strategic backing in the New Silk Road initiative. For example, the Central Asia-South Asia electricity transmission project (CASA-1000) received $15 million from the United States to build transcontinental power grid lines. The lines will transmit power from Kyrgyzstan and Tajikistan to the Pakistan electrical market. There is also talk of a Turkmenistan-Afghanistan-Pakistan-India (TAPI) gas pipeline. Both the Asian Development Bank and the World Bank have promised support for these two projects. Finally, Afghan border checkpoints are proposed to better facilitate trade between Pakistan and Central Asia via Afghanistan.

With a few exceptions, however, experts from Central Asia, Afghanistan, the United States, and Europe who were interviewed on the prospects of the New Silk Road initiative are skeptical. The survey was conducted with the support of the Hollings Center for International Dialogue.

Experts focus on different factors when analyzing the policy, depending on their country of origin.

Critics argue that the New Silk Road unnecessarily “geopoliticizes” what should be a standard trade policy. The policy is designed to deliberately exclude Russia, Iran, and China. It signals that the United States “has some sort of master plan or master idea behind pushing” regional projects that were in place before the New Silk Road was even introduced, says Alex Cooley (listen to full interview), professor of political science at Barnard College.

Two problems is that the initiative “comes from the outside” and is “donor-driven,” says Volker Jacoby (listen to full interview) from the Center for International Peace Operations based in Berlin. The Central Asian governments’ view of the New Silk Road may not coincide with the West’s.

Central Asian political leaders, businessmen, and entrepreneurs consider Afghanistan to be too culturally different and too inherently unstable to be a viable trade partner. The countries fear spillover of drug trafficking and insurgency from Afghanistan if trade links were to open.

Afghanistan is still seen as “a bit of an alien,” says Farrukh Irnazarov (listen to full interview), country director for the Central Asian Development Institute. Current Central Asian rulers are content trading with China and Russia; “You can’t convince Central Asian governments that Afghanistan is part of the region,” he continues.

On the other hand, entrepreneurs in Afghanistan see Central Asia as a promising economic market. For them, there are abundant possibilities from shuttle trading to energy sector cooperation, says Moheb Mudessir (listen to full interview), a BBC correspondent from the Afghan Service. The rich natural resources of Central Asia could play an important role in Afghanistan’s developing economy. Once international aid declines after 2014, Afghanistan hopes to become a transportation hub between Central and South Asia. And yet, Central Asia remains “one of the least involved neighbors in Afghan politics,” he says.

Many Afghan entrepreneurs resent the lack of trust their Central Asian counterparts feel about them. Former director of the Afghanistan Research and Evaluation Unit in Kabul, Paul Fishstein (listen to full interview), says northern Afghan traders are treated as “friends and neighbors” when they are importing goods from Central Asia, but they “become enemies” once they try to export goods from Afghanistan into Central Asia.

“There is a certain backwardness to the New Silk Road strategy,” says George Gavrilis, an independent scholar. Building new roads and establishing new border checkpoints will not automatically bring expanded trade. Instead, it usually happens that people seize economic opportunity and “the infrastructure [catches] up,” says Gavrilis.

Experts agree that the main political and security threats to Central Asian are internal, not from Afghanistan. Central Asian authoritarian regimes, fixated on preserving their rule, clamp down on civil society and political dissent, and in doing so they kindle further opposition among their citizens. Interstate trade is stalled by isolationist Central Asian regimes who refuse to open their borders to foreign business.

According to Cooley, the initiative implies that economic development in Central Asia and Afghanistan is hindered by a lack of entrepreneurship. However, the “number one economic barrier is kleptocracy coupled with capital flight,” he says. Any economic project backed by international donors will primarily benefit central elites, not regular entrepreneurs.

Regimes such as these tend to radicalize, rather than pacify, political activists. Dissenters eventually see no other way to challenge the incumbent except through violence. Insurgency in Tajikistan’s Rasht Valley in 2012, deadly riots in Kazakhstan in December 2011, and ethnic clashes in Kyrgyzstan in June 2010 are examples of how poor governance leads to violent instability.

Poor governance coupled with a corrupt security sector also creates a friendly environment for the proliferation of drugs and the spread of extremist groups. Autocratic ruling regimes often use Western donated military equipment to boost the capacity of their own personal guards rather than maintain the police force.

As Western presence dwindles in the region, Russian and Chinese influence is rising. Moscow is pushing to expand the Russia-Belarus-Kazakhstan Customs Union to Kyrgyzstan and Tajikistan.

In addition, Russia is growing its military presence in Central Asian countries. For example, the Kremlin has increased its military support to Tajik border guards. Thus, in the case of a security threat from Afghanistan, Central Asian countries are more likely to turn to Russia for military help, rather than the United States, says Shair Juraev (listen to full interview), a political expert from Kyrgyzstan.

Chinese influence is also expanding. In 2013, China’s trade with Central Asia reached $46 billion – a 100-fold increase since the fall of the Soviet Union. China is “certainly going to change the infrastructure-economic-trade landscape in the region,” says Joshua Kucera, a freelance journalist (listen to full interview). China is focused on promoting large infrastructural projects aimed at shipping goods from China west through Central Asia.

Unlike Moscow, however, Beijing’s economic presence in Central Asia has not yet translated into political influence.

Given the criticism and low expectations of the U.S. New Silk Road initiative and the already present roots of political insecurity, Western, Central Asian, and Afghan experts recommend that the United States and European Union delink security assistance from its democracy development packages. The West should specialize in human rights and democratization, prioritizing them above security interests, since these are elements both Russian and Chinese policies lack.

In addition, security assistance provided by the West should be in the form of military training and exchanges of knowledge, as opposed to weapons and equipment. This would prevent authoritarian leaders from being able to use Western-donated, sophisticated military equipment against their own people.

Moreover, donors should focus on assisting the entrepreneurial class. Small and medium enterprises (SME) in Central Asia have the power to demand better accountability from their governments. And yet, to date, SMEs have received little monetary support from Western donors.

Finally, even critics of the New Silk Road agree that it is a politically expedient way out of military engagement in Afghanistan. But they argue that it needs further financial commitment if the West is going to compete with the growing Russian and Chinese presence.

Click here to access all podcasts, including an additional interview with Ned Conway (listen to full interview), an analyst and consultant working on Central Asia.

Erica Marat is an assistant professor at the National Defense University. The views here are her own. Deborah Sutton contributed to this report. This article was originally published by The Diplomat.

Episode 11: Higher Education Internationalization – Picking Up Where We Left Off 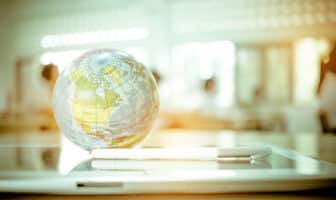 Political Islam or ‘Islamism’—as a narrative, an ideology, and a political project—stands at a crossroads today. Dialogue snapshot report.