The Economies of the Arab Spring

Until recently, the economic dimensions of the Arab Spring have played second fiddle to high-order political issues.  Policymakers and pundits have focused much more on the posturing of the Supreme Council of the Armed Forces (SCAF) in Egypt or on debating whether an Nahda will upend the secular order in Tunisia.  Less attention has been paid to the fiscal crisis states face and to the plight of citizens who have to cope with the economic scarcity and uncertainty that are part and parcel of political upheaval.  But as the transitions wear on, the focus on the Arab Spring’s political economy is taking its rightful place among the headlines and policy debates.

What shape will the economic transitions take in Egypt, Tunisia, and a post-Assad Syria? Who are the likely economic winners and losers?  How can states provide public services, social safety nets and a business-friendly environment?  Given a choice between international donors and economic development models, who are Arab governments and publics likely to turn to?

To address these and other questions, the Hollings Center for International Dialogue convened a three-day Regional Policy Dialogue in October 2011 entitled The Economies of the Arab Spring. Held in Istanbul, Turkey the dialogue brought together a group of Americans, Egyptians, Tunisians, Turks, and Syrians that included foreign policy and political economy experts, academics, journalists, activists, private-sector leaders, think-tank representatives, and former politicians and advisors.

This report presents a snapshot of the dialogue and implications that policymakers, practitioners, and private-sector individuals may find essential in understanding the ongoing transitions in Arab states. Four recurring themes ran throughout the dialogue sessions: 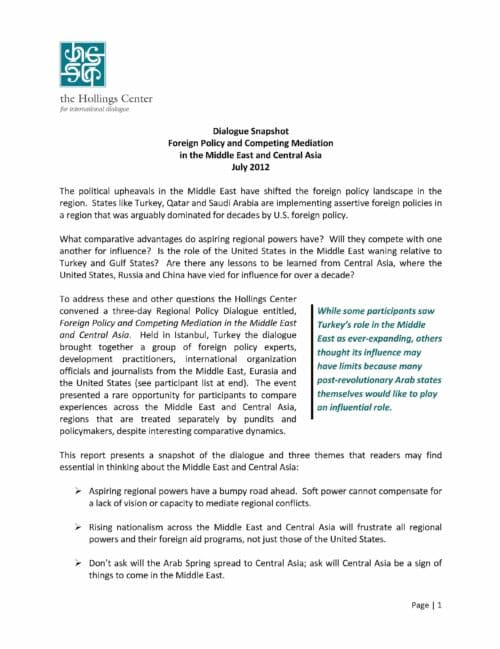