Food security in the Middle East and North Africa (MENA) region is viewed as one contributing factor in catalyzing conflicts in the region as well as perpetuating multiple humanitarian crises. The MENA region is the largest importer of food in the world, accounting for nearly 1/3rd of global cereal imports.  Rising prices in staple foods since 2009, coupled with rising turmoil since the Arab Spring in 2011, growing water scarcity, and poorly developed environmental and agricultural policies by regional governments have all contributed to the growing food crisis.  The region contains some of the highest risk countries for food insecurity, such as Yemen, in which severe water scarcity and prolonged civil conflict have combined to make Yemen the 11th least food secure country in the world.  Countries like Iraq, Syria and Egypt used to be large producers of grains, but due to instability and decades of mismanaged agricultural, they have become dependent on grain imports.  Growing food insecurity has led wealthier countries like Saudi Arabia to lease land in different countries to produce food, including land from some of the world’s most food insecure countries such as Ethiopia. Countries such as Turkey, Lebanon and Jordan also face changing food security needs as their populations grow in part due to large influxes of refugees.

To address some of these questions, the Hollings Center for International Dialogue, together with the University of Central Florida and the Executive Education Center of Al-Akhawayn University of Morocco, convened a dialogue in Casablanca, Morocco in September 2017.  Participants at the dialogue reached several conclusions, but more importantly raised further questions, thus highlighting the intricacies and complexities that surround this critical issue.  Some of the key conclusions included: 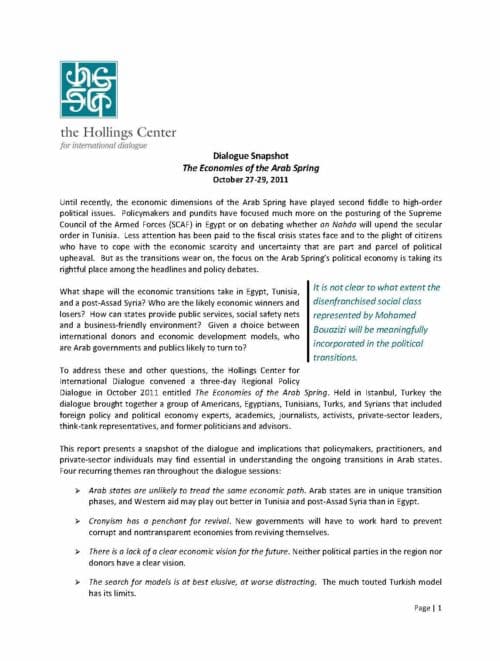